Rings shall be referred to as small, medium and large for this tutorial.

Set one on top of the other, allowing the smaller rings to sit inside the larger ones from the opposite chain.

Add a medium ring through two small rings from the previous row. This will connect the two separate chains together.

Add a large ring surrounding the medium ring just added, making sure also to only go through the two small rings from the previous row.

Add a medium ring through two rings from the previous row, passing through one of the ones passed through in the last step. 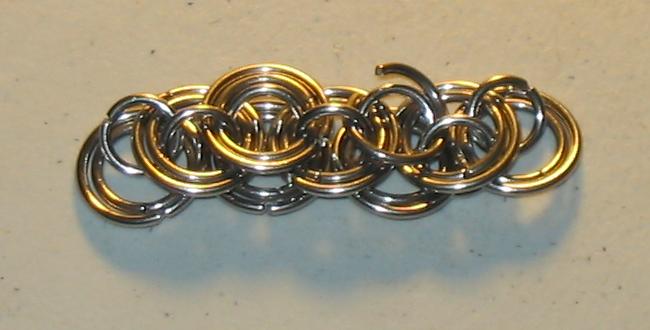 Close this ring and add another large ring, as you did two steps ago.

Close this ring and then add two sets of medium and large rings on the outside edges.

Unfortunately I've switched the orientation of the weave at this step, which can be done by turning the weave upside down. Here we start adding a row of small rings along the back. Each small ring will pass through two medium and large rings each. Be careful to make sure the ring doesn't go through any other rings.

Add thee more small rings in the same fashion as the one added in the previous step. The picture shows the two on the left closed and the two on the right open.

Actually, you will find it easier to add sets of small rings first, contrary to the first few steps in this tutorial, and also contrary to what some of the tutorials for Dragonscale demonstrate. Add three small rings along the back row.

Now proceed to add a medium ring through the small rings added two steps ago.

And a large ring.

Two more of each to complete the row.

Another set of small rings.

Closing them, of course.

And so on, until you end up with a nice sample, or make it into something.

Expanding to the side should be fairly simple. It's probably easier to start with a row of the small rings before adding the large ones, as I seem to remember it being with regular Dragonscale.
Original URL: http://www.mailleartisans.org/articles/articledisplay.php?key=635