A disclaimer to the more historically minded: I realize that the term "scale maille" is a misnomer, if not a complete non sequiter. However, I think it best describes what I will be discussing. These are not instructions on making recreations of historically accurate scale armour; they are simply a way to incorporate scale designs into maille.

The idea here is to use maille sheets as a backing on which to attach the scales. Any sort of sheet weave would work, but since it is simply there to provide a backing and probably won't be seen, you needn't worry about making it too visually appealing. Just what weave you use and in what size will be determined in large part by the specifics of what you are working on. I will give two examples, one using European 4 in 1, and the other using Japanese 4 in 1.

I would recommend using your European 4-1 at full stretch. If it changed dimensions, as it does when run left to right, that could likely throw off the placement of your scales. It is also quicker to make larger pieces when the weave is stretched out, and since this is just a backing, getting it out of the way fast is useful.

1) The first thing to do is cut your scales. Then decide how many points of attachment each will have. At least two should be used, because if you have only one the scales will be prone to swing out of place. To know where to put the holes in the scale, lay it on your weave and mark the places on the scale that line up with the rings it will be attached to. 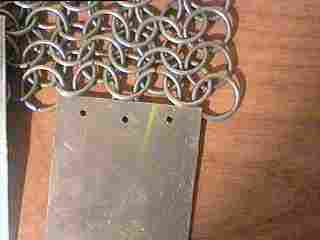 2) To attach the scale, use a small ring that passes through the hole in the scale, and then attach it to the ring. 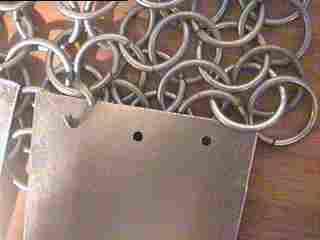 3) Continue for all the attachment points on the scale. 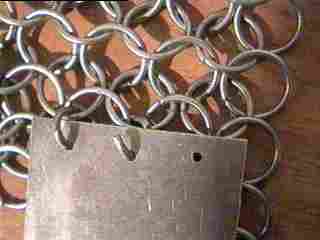 4) Continue attaching scales to the same row of rings and as close together as you feel looks appropiate. They can overlap horizontally or not. 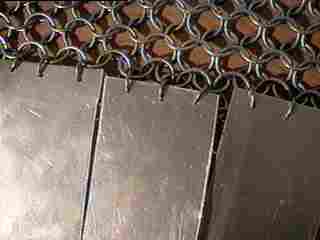 5) Once you have a row complete, move up to another row. How many rows up you go will be according to your taste, the weave you use, and the size of your scale. But the placement of the scales in this row should be off set from the placement in the first row. 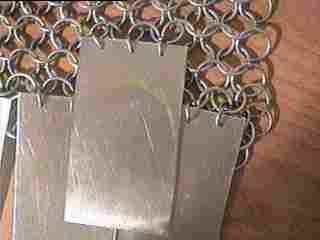 6) When you complete that row move up the same number again and put a row of scales in line with the first row. Continue alternating back and forth. All the rings that connect the scales to the maille will be hidden, except for those in the topmost row of scales.

When doing this with a Japanese weave you can set the size of the scale so that the vertical rings already present in the weave also serve as the rings that connect the scales to the sheet. In this case, the Japanese 4-1 sheet is connected to a Half Persian 3-1 belt, which draws the sheet in a bit. How much the sheet is expanded or contracted will effect what size scales work, and how they look. 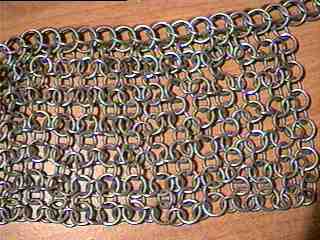 Here is an example using pennies for the scales. The steps are pretty much the same as for the European 4-1.

1) Attach a penny using one of the vertical rings in the weave.

2) Attach another one in the same row of vertical rings and some distance (whatever you like best) to the side.

3) Move up an appropriate number of rows, and attach another penny, overlapping and off-set from the first row. 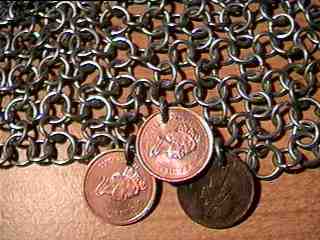 There is no limit to what material you can use for scales. Any sort of metal, coin, leather, cloth. You could even make the scales themselves from maille by using a dense European weave to form thick scales and attaching them to a thinner maille backing. This looks particularly good when you alternate colours as you alternate rows.
Original URL: http://www.mailleartisans.org/articles/articledisplay.php?key=62