Ring Sizes (AR: 5)
Half Persian 3 Sheet 6 in 1 is one of the most variable weaves for making jewellery; AND it shows a multitude of different looking versions depending on weaving direction. That is based on three facts. One is that HP3-1S6, even woven 'regular', shows a bias of around 20 to 30 degrees in itself. The second one is that this weave shows different behavior when the row are oriented normally compared to the 90deg rotated (sideways aka 'GSG') direction. And the third one is the very different behavior and look of this weave's border rows compared to the center rows of a wider strip. So even different width woven pieces with the SAME direction can get totally different looks. And if you begin to weave HP3-1S6 in biased versions, you will get a multitude of fine looking variants. Just a mailler's playground...

Use rings with an AR of 5 or a bit higher, as lower ARs will result in a weave too tight to be woven at all. Only very narrow strips consisting of weave border rings work at ARs down to around 4.5 (FYI: these numbers are real, measured ones, NOT mandrel diameter based).

As I experienced the 'GSG-style' (=sideways) weaving direction the most versatile and well behaving one, I will show the making of ONE biased example here; others can be made in similar ways. Start working in GSG direction - oraat style, half-row for half-row - NO speed weaving. Use that technique to make a 3-column wide GSG. A tutorial for creating three-column GSG is in the weave articles section as well, if the starting seems to become a show stopper for you.

Then widen that GSG to four rows at one side - just add a pair of rings. If you have four rows, you already know the technique to widen the pattern sideways and have one side of the pattern. 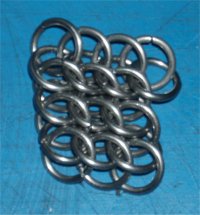 Leaving the number of rings used to widen the one side away at the other strip side is straightforward, then. 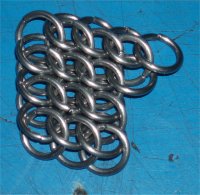 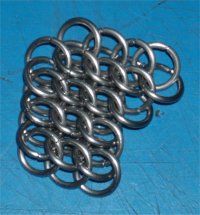 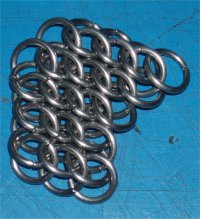 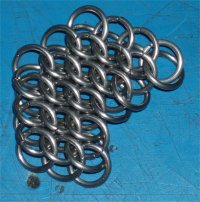 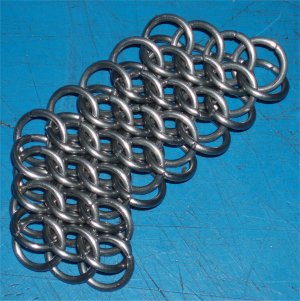 After having reached a sufficient amount of rows the starter piece can be removed, or stored for re-use.

If you have gained some experience, you may use the very same technique with narrower strips, maybe biasing in the other direction, changing the biasing amount (= changing the number of rows woven straight before one or even more rings are added), and much more. Just go playing at that playground. You won't be disappointed, as nearly all weaving directions result in fine looking weaves, that always hold their shape very well - and yield sometimes astonishing results.